In keeping with President Buhari’s goal of lifting 100 million Nigerians out of poverty over a ten-year period, the federal government has continued to strengthen its collaboration with states for a more effective delivery of poverty reduction programmes nationwide.

The latest of these efforts to increase synergy took place on Thursday, 18th March 2020 in Abuja with an engagement between the Permanent Secretary, Federal Ministry of Humanitarian Affairs. Disaster Management and Social Development Bashir Nura Alkali  and permanent secretaries from all 36 states who supervise interventions under the federal government’s National Social Safety Nets Project (NASSP) at state level. Also in attendance were officials from the National social Safety Nets Coordinating Office (NASSCO) and the National Cash Transfer Office (NCTO)

In his welcome remarks Bashir Nura Alkali stressed the importance of synergy across the federal, state and local government levels in administering programmes designed to help Nigerians beat poverty.

He said in response to global ratings which indicate that Nigeria is host to more of the world’s extreme poor and vulnerable, the federal government had established the Federal Ministry of Humanitarian Affairs, Disaster Management and Social Development in August 2019 to strengthen response to complex emergencies and disaster while providing social protection to poor and vulnerable. He summarized the core mandate of the ministry as humanitarian in nature, protective of the rights of the vulnerable which also branches into social development.

“The ministry’s National Social Safety Nets Project (NASSP), a federal government initiative supported by the World Bank is set up to reduce poverty and socio-economic vulnerabilities in Nigeria. NASSP was designed to have structures from the federal to the states, down to the Local levels reflecting the three tiers of government. To that extent there is the National Social Safety Nets Coordinating Office (NASSCO) and the National Cash Transfer Office (NCTO) at federal level; State Operations Coordinating Unit (SOCU) and State Cash Transfer Office (SCTU) at the state level. Whilst at the local government level we have the Community Based Targeting Teams (CBTT) and Cash Transfer Facilitators (CTFs)”

According to Alkali, implementation of the NASSP to actualize the National Social Register and Conditional Cash Transfer programme is structured to seamlessly follow a bottom-up approach. He charged the participants from the states to play their part in keying into the vision.

“Bearing in mind the pivotal role each and every one of us seated here could play to actualize the vision of Mr. President to pull 100 million Nigerians out of extreme poverty, this meeting couldn’t have come at a better time to provide an opportunity to further socialize the collective our collective mandate to contributing towards Mr. President’s ambition”

To build the register of the poor, community members play a pivotal role in the identification of poor and vulnerable households through the local government Community Based Targeting teams, following a process coordinated by the State Operations Coordinating Unit office of each state. This process makes the register a state social register. The aggregation of state registers is what makes up the National Social Register.

A similar process is followed in the cash transfer programme where officials from the SCTUs are responsible for registering beneficiaries mined from the social register into a payment register using the Cash Transfer Facilitators at the Local Government who also train beneficiaries in a suite of livelihood, social and behavior change activities.

Currently, the National Social Register  has about 30 million Nigerians across 36 states and the FCT from seven million poor and vulnerable households. The cash transfer programme on the other hand has enrolled 1.6 million households across 35 states for payment of the N5000 monthly stipends out of which 991,965 households are receiving payments  so far in 28 states and the FCT.

Speaking at the event the National Coordinator of NASSCO, Mr. Iorwa Apera, said the state permanent secretaries are oversight officers of the programme in the states.

“There is a need for us to meet regularly and analyze issues, modalities and chart a way forward for the programme”. 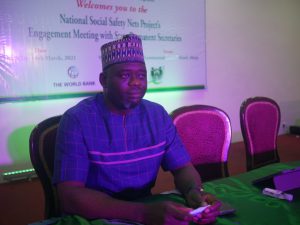 Mr. Apera said, permanent secretaries, must be up and doing to avoid diverting the objectives of the programme in the state. He added that states were liable to refund monies to the World Bank because accounts would be audited and if the funds are misused, they would be refunded.

Similarly, the National Programme Coordinator of Conditional Cash Transfer, Mr. Ibrahim Jafar said carrying along all stakeholders in the programme is very instrumental to the success of it.  He revealed that there were some challenges in payment, but, soon, most of the issues would be addressed.

The state Permanent Secretaries, drawn mostly from state ministries of planning; Women Affairs and Social Development appreciated the Ministry of Humanitarian Affairs for the opportunity and called for more frequent engagement to bridge any information gaps between their offices and the state organs of the NASSP.  The NASSCO National Coordinator stressed that moving forward, any information passed to the SOCUs and SCTUs from the federal organs would also be shared with the respective state Permanent Secretaries. 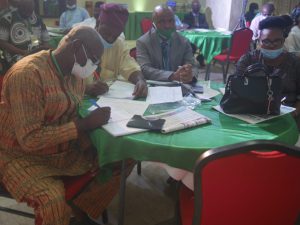