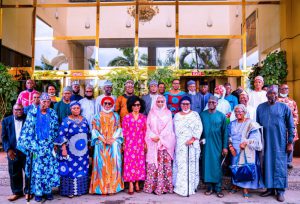 The National Senior Citizens Centre (NSCC) on Monday (August 2) in Abuja held its maiden dialogue to discuss issues affecting senior citizens and how their experience and wealth of knowledge can be leveraged for increased national development and effective service delivery. The dialogue marked the first major outing of the centre since the constitution of its board.

In her address, The Honourable Minister for Humanitarian Affairs, Disaster Management and Social Development, Sadiya Umar Farouq said that the federal government under the President Muhammadu Buhari administration has developed the National Policy on Ageing and also established the National Senior Citizens Centre to meet the challenges of older persons in the country.

She said: “In developing the National Policy on Ageing and establishing the National Senior Citizens Center, the government of His Excellency, Muhammadu Buhari, has ensured, that the very essential institutions, systems and mechanisms to facilitate the quality of life, economic and social participation of older persons are guaranteed and that the challenges of older persons and the opportunities that accrue from meeting these challenges are integrated into Nigeria’s development plans.”

Earlier, the Director General of the National Senior Citizens Centre Dr Emem Omokaro commended Nigeria’s senior citizens for their resilience in the face of hardship over the years. She also thanked the Minister for her passionate efforts towards the plight of the aged.

“Today we have the National Policy on Ageing and the Senior Citizens Centre. The next thing is that we need to talk. This dialogue is important so that senior citizens will know their rights and what is being handed to them by the law. There is no way we can identify the needs of senior citizens and cater to those needs as directed by the act without forging an engagement mechanism,”

Also present at the dialogue were the NASSCO National Coordinator, Iorwa Apera, who made a presentation of the status of Senior Citizens in the National Social Register, Senior Citizens representing various categories including the urban and rural, the military and paramilitary as well as those from the public and private sectors.

The National Senior Citizens Centre was approved by the Federal Executive Council in January 2018 whilst its board was constituted in June 2021. The centre is to cater to the social welfare of citizens aged 70 and above in areas like healthcare, pensions, income security, leisure, supplementary income and other social protection safety nets.

As of July 2020, the National Social Register of Poor and Vulnerable Households holds data for one million, six hundred and twenty-five thousand, nine hundred and thirty-seven elderly (1, 625, 937) persons across 36 states and the FCT. Forty- eight percent of this total number are males, whilst fifty-two percent is female. A further breakdown of data in the NSR shows that fractions of this aged population deal with vulnerabilities including health-related issues, financial deprivation, illiteracy, and lack of basic care.

The Federal Ministry of Humanitarian Affairs, Disaster Management and Social Development has so far mined 200,748 elderly persons nationwide from the National Social Register to benefit from the Federal Government’s Covid-19 Cash Transfer Programme.

The National Senior Citizens Centre is domiciled in the Federal Ministry of Humanitarian Affairs Disaster Management and Social Development.