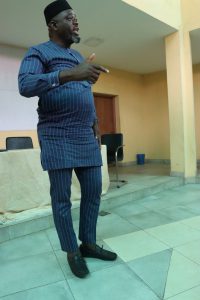 The National Social Safety Nets Coordinating Office (NASSCO) on Wednesday, 28th July held an interactive session with members of the Nigeria Union of Journalists (NUJ) Abuja Council in furtherance of its engagement with the media and civil society.

In welcoming the attendees, Secretary of the Council, Mr. Ochiaka Ugwu thanked the management of NASSCO for deeming it worthy to brief members of the NUJ on a critical aspect of government policy. He stressed the need for such meetings to hold more regularly.

While making his presentation, the National Coordinator Iorwa Apera extended gratitude to the union for availing him the opportunity to address its members on the work NASSCO is doing.

He took the audience through a detailed presentation that shows the mandate of NASSCO as an office under the Federal Ministry of Humanitarian Affairs, Disaster Management and Social Development, responsible for laying the building blocks and standards for a sustained social safety nets programme for Nigeria’s poor and vulnerable citizens.

He laid out the process for building Nigeria’s National Social Register (NSR) which he stressed is built by states via a community-driven approach that allows community members define poverty within their context and identify the poor and vulnerable in their domain. This approach, which is based on a template agreed with the federal government and World Bank, has seen the National Social Register grow rapidly from less than one million households in 2018, to its current database of 8.5 million households made up of over 36 million individuals.

The National coordinator pointed out the vital place of the NSR as a potential gateway to accessing social programmes, which has allowed government and development partners including UN agencies, philanthropists and public-spirited citizens to pipe life changing interventions to some of society’s most vulnerable.

He expressed regrets that the Covid-19 pandemic had left a devastating economic effect on the livelihood of low-income urban and semi-urban dwellers, a development he pointed out, made it imperative for the Federal Ministry of Humanitarian Affairs, Disaster Management and Social Development to come up with another layer of economic assistance for those rendered vulnerable by the pandemic.

According to Apera, in response to the economic shocks of Covid-19, the federal government set about creating a Rapid Response Register (RRR) to target 20 million Nigerians out of which one to three million would benefit from a Covid-19 cash transfer programme for at least six months.

To identify Nigerians eligible for this intervention, NASSCO, he explained, has relied on geographical satellite remote sensing technology to locate urban poor wards and communities and that targeting and enrolment of affected households, currently underway, nationwide, is done using cellphone short messaging service (SMS) technology that allows residents of targeted communities register to be assisted by following simple steps via USSD codes.

The process, the National Coordinator revealed, has so far received completed applications from more than 1.7 million Nigerians from the 36 states and the Federal Capital Territory.

He said of the $500 million World Bank facility sourced for the National Social Safety Nets Projects, over $300 million has so far been disbursed on different streams of the project including the Conditional Cash Transfer project and building the National Social Register. The balance, he said, would be used for the remainder of the project to offset cash transfer arrears owed in some states and to pay some of the households on the Rapid Response Register.

The National Coordinator called on the media to lend its voice in galvanizing citizen participation in government poverty reduction programmes, demanding accountability and making a case for increased investment in the nation’s Social Protection Space.

Chairman of Abuja NUJ, Emmanuel Ogbeche, in a remark, called for more regular interphase between NASSCO and the union, to keep journalists apprised with government programmes addressing poverty and vulnerability.

He proposed quarterly interactive sessions and indicated the readiness of journalists to go for spot assessments on the field to gauge public perception of government’s poverty reduction interventions.

Before the event ended, journalists asked questions about the spread and impact of the cash transfer and Rapid Response Register and how inflation and security challenges were impacting implementation of the NASSP among others.

The National Coordinator provided answers to questions before the session was brought to a close.

Some pictures from the event.